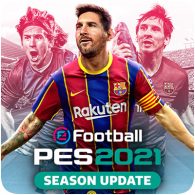 Konami have announced that this year’s PES 2021 title will simply a “seasonal update” as opposed to a full-on sequel, and will be launching in September 2020. This means that the core game will be the same as PES 2020, but will feature the latest club and season updates, as well as the UEFA Euro 2020 content.

The update is now available to pre-order from the PlayStation Store for €29.99 / £24.99. The update will be available to download from 15th September 2020. A trailer for the season update has been released too, which you can view below:

A special edition of the update is also available called “Club Editions”, which will feature branded menus, exclusive kit and myClub Squad content. The Clubs Edition will be available for the following teams only: FC Barcelona, Juventus, Manchester United, FC Bayern, and Arsenal FC; and will be priced at €34.99 / £29.99.

PES 2022 on the other hand promises to be a full on overhaul of the game, running on the next-gen Unreal Engine. Skipping a full title update this year means the developers will have more time to overhaul and improve the game for the next major release. A concept video has been released to tease the 2022 version:

PES 2022 will be the first version of the game that will appear on the PS5 and Xbox Series X, with an expected release date of mid to late 2021.