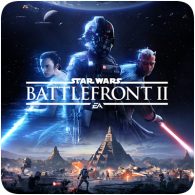 A PlayStation Plus advert on Instagram has revealed that Star Wars Battlefront II will be June’s second title. Sony released the first title, Call of Duty: WWII earlier this week, but the second title has yet to be officially announced.

The advert has since been removed from Instragram, but not before it was captured and uploaded to YouTube:

The advert appears to be legitimate, so we’re just waiting for Sony to officially reveal the second title.