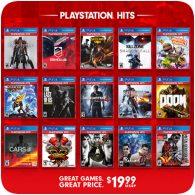 Nioh and Friday the 13th: The Game will also be added to the range. The games will be priced at £15.99 or less.

In recent months, Sony has also added Resident Evil 7 biohazard, Tales of Berseria and Plants vs. Zombies Garden Warfare 2 to the line-up.

Sony is also planning to release a PlayStation Hits Console Bundle, which will include the following: