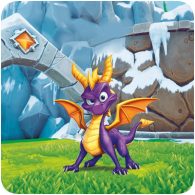 20 years since the first Spyro game was released on the PlayStation, the purple dragon is making a return with Spyro Regnited Trilogy for the PS4. The original PlayStation games will be remastered with high-def graphics, improved controls and a host of improvements.

The trilogy is being developed by Toys for Bob and will be releasing in September 2018 for the PS4 and Xbox One. A trailer for the game can be found below:

The game is scheduled to release on 21st September 2018.