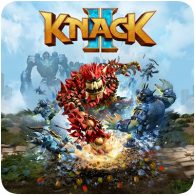 A playable demo of upcoming game Knack 2 has been released on the European PlayStation Store today. The free demo is 2.6 GB in size and features the Monastery level from the game. The game includes local co-op gameplay, allowing you to play the demo with a friend on the same TV.

A new TV advert for the game has also been released, which can be found below:

Knack 2 releases on 6th September 2017, for £29.99. The game is currently available to pre-order from the PlayStation Store, and includes a Knack 2 Dynamic Theme and a digital edition of the official Soundtrack.