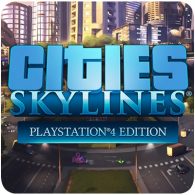 City-building computer game Cities: Skylines is officially heading to the PS4 in a few months, having previously been released on Xbox One and PC. The single-player game will be launching on the PS4 on 15th August 2017, featuring the same content as the Xbox One version.

The PS4 version will include the base game and the first expansion “After Dark” for the game, and will be almost identical to the Xbox One edition. There is no information on whether the game’s other expansion packs will also make it to the PS4.

Check out the announcement trailer for the game below: