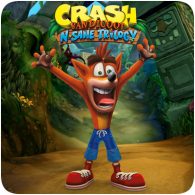 Crash Bandicoot fans out there will be happy to know that the PS4 remaster has a official release date. Activision has confirmed that Crash Bandicoot N. Sane Trilogy will be releasing on 30th June 2017 in both Europe and North America. The original games have been remastered, with every level recreated as accurately as possible.

According to Dan Tanguay, Game Director, this is a “AAA remaster” and not a remake. The game was developed using the original level geometry so that it plays as close to the original as possible. The game will include new features which are yet to be revealed.