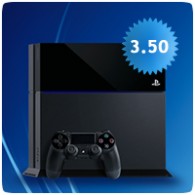 Sony has revealed details about what the next major PS4 Firmware update will include. PS4 Firmware v3.50, codenamed Musashi, is going into beta testing tomorrow, 2nd March 2016, and will include some frequently-requested features including Friend Online Notifications, and the ability to Appear Offline.

If you’ve applied to take part in the beta, keep an eye on your email account for instructions on how to download and install the beta version.

In the mean time, here is what you can look forward to: