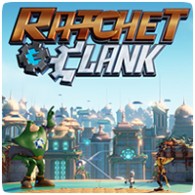 Ahead of E3 2015, Insomniac Games have released the first footage for Ratchet & Clank on the PS4. The video includes glimpses of footage from the film, and then your first-ever look at gameplay footage directly from the game coming exclusively to PS4. In addition, you can also find a 8-minute gameplay video.

The trailer above looks so good, it hard to tell apart the movie footage from the game. Don’t forge to also check out the 8-minute gameplay trailer below.