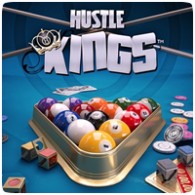 The PS4 version of Hustle Kings will be available to buy in full or you can download the free-to-play version that uses Hustle Kings Credits (HKC) as an in game currency. The free-to-play version includes all the basics you need to enjoy the game including a practise mode, a career and a new League mode, but we expect certain features to be available only with in-game purchases using real money.