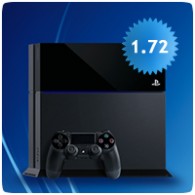 Sony has released a new firmware update for the PS4 overnight, updating the system software to v1.72. The minor update weighs in at 194 MB and is mandatory if you want to continue to access the PlayStation Network. The update does nothing more than improve system stability.

You’ll be promoted to update the PS4 firmware when you turn on the console. If you’re lucky, the update will have already downloaded to the console, and will just be awaiting installation.