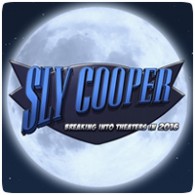 CG-animated movie, Sly Cooper, has got its first trailer. Based on one of PlayStation’s most beloved franchises, Sly Cooper is a kinetic and comedic heist film that tells the story of Sly Cooper, an orphaned raccoon thief, and the adventures of his childhood friends and partners in crime, Bentley Turtle and Murray Hippo.

In the film, Sly learns that he comes from a long line of talented and international thieves and is catapulted into a global adventure as they race to reassemble pieces of an ancient book holding the Cooper clan’s family secrets before it can fall into the hands of Clockwerk – an evil Russian metallic owl bent on ending the Cooper family line.

Sly Cooper is slated to release in 2016. The film will also be released in 3D for those who want to feel like they are in the actual Sly Cooper world.