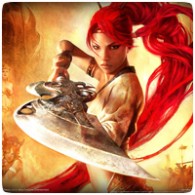 The first trailer for the CG animated film based on the PS3 game, Heavenly Sword, has been released. The Heavenly Sword film is slated to be released digitally worldwide, as well as theatrically in select global markets, in Spring 2014, starring Anna Torv, Alfred Molina, and Thomas Jane.

Heavenly Sword is a dramatic tale of revenge that sees Nariko (Anna Torv), a fiery red-haired heroine, embark on a quest of vengeance against the invading King Bohan (Alfred Molina) and his army. Once considered the failure of a legendary prophecy, Nariko must wield a sword that was ultimately meant for another. This ancient Heavenly Sword, once belonging to a powerful deity, can never be wielded by a mortal without slowly and inevitably killing them. For Nariko, it’s a race against time to avenge her clan before her life is irreparably overtaken by the omnipotent Heavenly Sword.