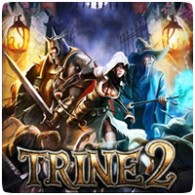 Frozenbyte has revealed that a port of Trine 2 is coming to the PS4, called Trine 2: Complete Story. Trine 2: Complete Story is a sidescrolling game of action, puzzles and platforming. You play as the Thief, the Wizard and the Knight, known as the Three Heroes, who make their way through dangers untold in a fantastical fairytale world.

The game features an exciting adventure full of action, including physics-based puzzles using fire, water, gravity and magic; wicked goblins as the heroes adversaries; and a magical environment full of wonder.

The game includes the original levels from the PS3 version, along with the levels found in the Goblin Menace expansion and the secret level Dwarven Caverns. The PS4 version will also boast beautiful graphics in 1080p resolution at 60 fps, and will also support stereoscopic 3D.