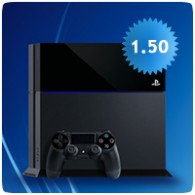 PS4 Firmware v1.50 is a day-one update for the console, available from launch. The firmware update adds a number of advertised features to the console, including Remote Play, the ability to record and upload game footage, online multiplayer and lots more. The patch is 300 MB in size.

The v1.50 software update will add the following features to the system: