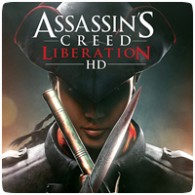 Ubisoft has revealed the official release date for Assassin’s Creed III: Liberation HD on the PS3 – a HD remake of the original PS Vita version of the game. The game will be coming to the PlayStation Store on January 14th 2014 in North America, and the following day, on January 15th 2014, in Europe.

Like the PS Vita version, the same is set in New Orleans between 1765 and 1780, in the period between the end of the French and Indian War, up to the middle of the American Revolution. Liberation tells the story of Aveline; a female Assassin of mixed French and African heritage. Brought up in a world of privilege and contrasts, Aveline becomes a strong-willed woman and an avid opponent of slavery.

Recruited to the Assassins by an escaped slave, Aveline joins the struggle against the Templars as they try to take control of New Orleans following France’s handover of the city to Spain. Striking hard and fast, she is instrumental in the Louisiana Rebellion that forces the Spanish and Templars out of the city for nearly two years before they return in force.

In addition to the HD upgrade, we also have new missions specific to Aveline’s Personas. Aveline is the first Assassin with such clearly different character types — Assassin, Lady, and Servant. Each persona has its own advantages and disadvantages when playing missions, and each generates a different reaction from the city life around Aveline. That’s a total of 15 missions delving deeper into Aveline’s story.