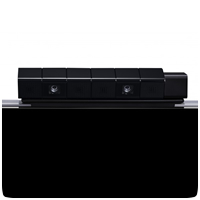 Sony has confirmed that the PS4 will feature Kinect-like features with the use of the camera, including voice commands to navigate through the operating system and facial recognition. The features were previously leaked in the PS4 listing on Amazon, but confirmed at Sony’s TGS Conference last week.

Voice commands are also said to be coming to launch title Knack. The features have been kept largely quiet by Sony until now, so they don’t appear to copy Microsoft. The camera won’t be bundled with the PS4, but can be picked up for around £50 from launch.

It’s unclear just how advanced Sony’s voice and facial recognition technology on the PS4 will be, but hopefully the features mean Kinect-exclusive titles will make their way to the PS4 in the future.