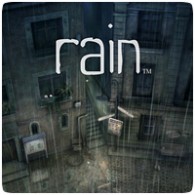 Japan Studio and Playstation C.A.M.P. have today revealed the release date for their new title, rain, as well as releasing the second Developer Diary. The game is now available to pre-order from the PlayStation Store, with the game releasing on October 2nd 2013 across PAL regions, and a day earlier in North America.

The game will retail for €12.99 in Europe and $14.99 in North America. If you pre-order the game, you’ll receive a Dynamic Theme, five hand-drawn Avatars, a Musical Montage (which includes beautiful music pieces and sound effects from the game) and a Static Theme all for the same price.

Once purchased, the goods will be available for download on 2nd October. This pre-order package will not be available after 1st October so if you want the bonuses, you’d better pre-order before it’s too late.