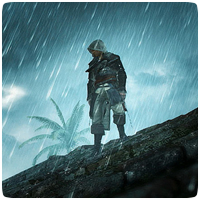 The first gameplay trailer for upcoming Assassin’s Creed IV Black Flag has been released, showing the exotic world of The West Indies in 1715. The player takes the role of new protagonist Captain Edward Kenway, a pirate trained by Assassins, as he explores the seas during the Golden Age of Pirates.

Edward lives in secrecy and battles alongside historical pirate legends such as Blackbeard and Calico Jack. But what truly motivates this dashing rogue and how is he connected to this suddenly sprawling pirate empire?

Assassin’s Creed IV: Black Flag will be released on the PS3 and PS4. Both versions will have an additional 60 minutes of exclusive gameplay via the PlayStation Network at the game’s launch.