God of War: Ascension has sparked an outrage over one particular trophy for promoting misogyny. In a scene in the game, Kratos beats a woman to a bloody pulp, and the player is rewarded with a trophy called “Bros Before Hos”. But the trophy has landed the developers in hot water, and will be patched to something less sexist.

Santa Monica Studio will be renaming the trophy to “Bros Before Foes” instead.

“We have created and will soon push out a patch for God of War: Ascension that alters the title of one of the game Trophies. The text was offensive to some members of our community and impacted their enjoyment of the game,” read a statement from Sony Santa Monica sent to Joystiq. 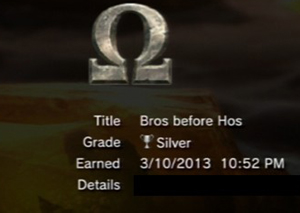