Sony revealed the PS4’s specification, part of the new user interface (UI) and the new DualShock 4 controller, but a lot of questions about the console remain unanswered. It’s obviously intensional, so Sony has more to show off and announce at E3 laster this year, like revealing the actual hardware. Here are some questions that remain unanswered so far.

The PS4 hardware was obviously not revealed at the PlayStation Meeting on Wednesday. Sony president of Worldwide Studios Shuhei Yoshida apologizes to gamers for not showing the device yet, but it’s because it’s not finalised. “I’m sorry we did not show the hardware,” Yoshida said. “But we have plans from now – in February – through the year for the launch. We like to disclose things based on what we think we really want to communicate first. And next time we will talk about these things.” (via GameSpot)

Sony says the PS4 will be launching later this year, but which regions does this apply to? Since the event was held in New York, it’s safe to say that North America will see the PS4 before the end of the year, but what about Europe? In the past, Europe and PAL regions have been the last to get new hardware (you may recall that the PS3 arrived in PAL regions months after the Japanese and North American launches).

Hopefully, Sony is working hard to finalise the hardware and aim for simultaneous global release.

The PS4’s hardware is powerful. The AMD developed GPU that will be used on the PS4 is capable of 1.84 TFLOPS of processing power, compared to the PS3’s “Reality Synthesizer” GPU which was only capable of 400 Gigaflops. That makes the PS4’s GPU around 4.5x more powerful. The PS4 will have 16x more RAM than the PS3. The PS4 will be fitted with 8 GB of GDDR5 RAM, while the PS3 has only 512 MB of RAM.

With all this powerful hardware, the price is a big question mark. When the PS3 first launched, it cost £425 in the UK, and update at this hefty price was slow. Sony will need to price the PS4 lower than this if it wants to make the PS4 a big success from the start. Sony can have a number of bundles available (like with the PS3) with different sized hard drives to offer the console at different price points.

Sony has already revealed a number of titles for the PS4 at the event, but which of those will be launch titles and how many can we expect? Just because the games were revealed along side the PS4 doesn’t mean they’ll all be available from launch. Activision confirms that multiple launch titles will be released. Hopefully, the full line-up of games is revealed at E3.

Sony will need to have a strong launch line-up, and then a continuous stream of new titles to avoid that lull in between games. The PS Vita suffered from a lack of post-launch titles, which made almost every gamer complain about the “lack of games” on the Vita. Let’s hope Sony has learnt it’s lesson.

With the mobile space booming, games are cheaper on the iPhone and Android compared to consoles. Mobile games of equal quality to console counterparts sell for cheaper on those devices, so Sony will need to be competitive with the pricing of games. In a interview with CNBC, SCEA CEO Jack Tretton stated that the pricing of PlayStation 4 games will range anywhere from $0.99 to the max pricing of $60 (via Coin Arcade).

The difference will be that gamers will be able to try any game before they buy thanks to Gaikai’s streaming technology. This could work for or against Sony, but it will mean developers will churn out better games to entice gamers to part with their money.

While it was noted that the PS4 will be able to stream PS1, PS2 and PS3 games using Gaikai’s technology, what about actual backwards compatibility? Will PS3 gamers be able to play their entire games library on their new console? Lets hope so, but nothing definitive was announced.

Shuhei Yoshida says the console will have “no backwards compatibility. You can quote me on that.” Sony are working on something, but Sony “are not talking about [their] emulation plans as yet,” he says. “So there are two ways, emulation or cloud services. But native support, no. Sorry,” Yoshida said. (via Polygon)

Sony confirmed that the PS4 will have a hard disk for local storage, but there was no mention of an optical drive. More than likely, Sony will include a Blu-ray drive with the console, but it could also be excluded in order to keep costs down. The fact that a optical drive wasn’t mentioned at the event could mean that Sony is toying with the idea of having a hard-disc only console. 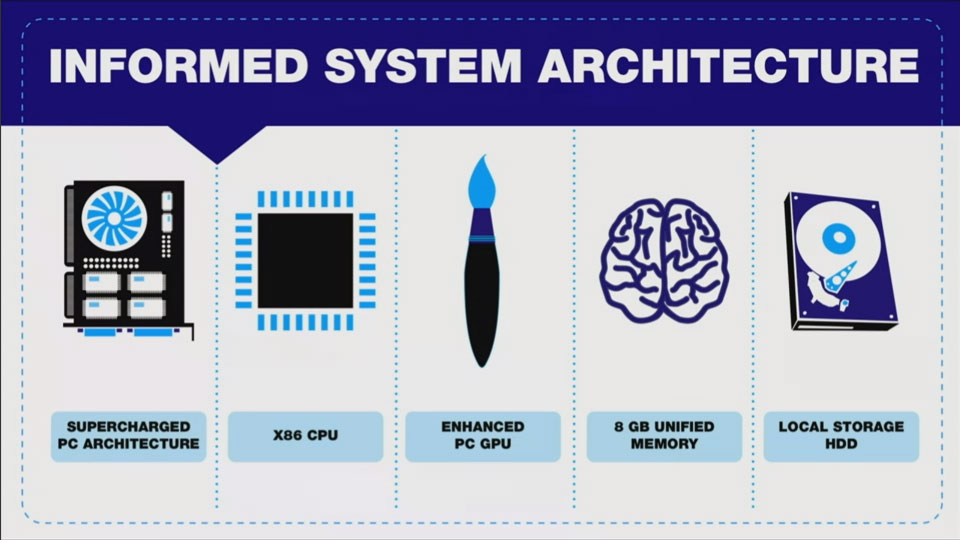 How many players will the PS4 support locally? The PS3 was able to support a maximum of 8 controllers connected the console, though there were very few games that supported this number. The new DualShock 4 controller doesn’t include any visual indicator of the maximum number of players supported.

The light bar on the controller will be used to tell players apart, with each player having their own colour, but that doesn’t give a clear indication of the maximum. The PS4 could support more than 8 local players thanks to the colour range the light bar can support, but we’ll have to wait to hear an official number from Sony.

PlayStation Move and the DualShock 4