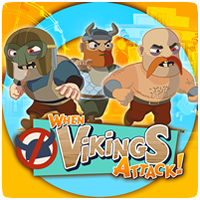 Cross-play title When Vikings Attack! is getting new DLC next week, titled When Vikings Relax!. The DLC will be available from February 13th 2013 and will include new versus maps, a new single-player mode, new unlockable characters and six new trophies.

In the pack you will find:

On the day of release, a new When Vikings Relax Special Edition pack will also be released, which contains all the DLC and the original game for €12.99 as well as a dynamic theme and some avatars for just €0.49.