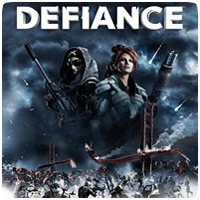 Trion Worlds have announced the release date of open-world MMO shooter, Defiance, as well as releasing an all-new live action trailer. The game is tied to the TV show of the same name, debuting on the Syfy channel on April 15th 2013. Set in St. Louis, the series will chronicle the lives of humans and aliens in St. Louis.

Since the show and game take place at the same time, both show and game will overlap as the weeks pass. Check out the live action trailer for the game below. The game will be launching on April 2nd 2013, a few weeks ahead of the TV show.