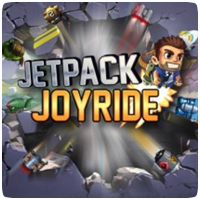 Free-to-play iOS / Android title Jetpack Joyride has launched in North America this week, available on all three of Sony’s platforms. The game has been downloaded over 35 million times on mobile devices, but the game costs a premium on Sony’s consoles, costing $3.99 instead of being free like on iOS and Android.

The game is available in North America for the moment, and releasing in Europe later today. In the meantime, check out the trailer below:

The game features 34 in-game achievements, which are not actual PSN trophies since the game is a Minis title rather than an actual PSN release.