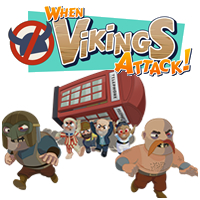 When Viking’s Attack is now available for pre-order from the PlayStation Store in Europe, with the game being released this week on the PS3 and PS Vita. However, if you pre-order the game before release, you can add 30% off the full price. Even better is that the game is cross-buy compatible, so you will pay just £5.49/€6.99 for both the PS3 and PS Vita versions of the game.

Once the game is released, the game will be available for £7.99/€9.99 for both versions of the game (combined). The game can only be pre-ordered from the PS3’s PlayStation Store, so be sure to make the most of the pre-order offer before it’s too late. If you pre-order the game, it will automatically download on the day of release too.

The full game will be available on November 7th 2012 on the PS3 and PS Vita. Purchasing either version will allow you to download the other version for free.