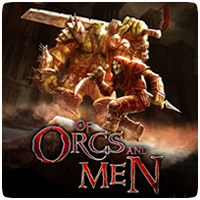 Action RPG, Of Orcs and Men, is available on the PS3 from today across Europe, and Cyanide Studio have released the launch trailer. The game taking place in a dark and mature universe where Greenskins (orcs and goblins) have finally been defeated after a long war against the human kingdom.

The emperor decided that, in order to prevent any further war against the greenskins, it was better to conduct full-on genocide! Unfortunately for you, you’re going to take control of an Orc and a Goblin.

As the game starts, Arkail (the massive Orc) and Styx (the stealthy goblin) are among the last of their race still alive. They are sent on a suicide mission – to reach the land of the humans to find and assassinate the Emperor, thus stopping the massacre and enslavement of greenskins.

The game features unlockable trophies, which even the internal testers have had difficulty unlocking on the Extreme difficulty level.

Of Orcs and Men, Trailer