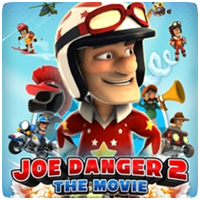 Sony has revealed the release date for Joe Danger 2 on the PS3, and unveiled details about exclusive DLC for the game. The game will be available this week on the PlayStation Store. The exclusive PS3 DLC for the game is called “Joe Danger Gaiden” and features an additional 10 hours of gameplay.

What’s the point of being the World’s Greatest Stuntman, if you can’t show your friends? Now you can save, playback and upload to youtube your greatest stunt spectaculars.

On Joe Danger 2, you can share your own levels globally online. As well as all the extra content in Joe Danger 2, we’re also getting ready some exclusive developer levels which will be ready on launch day!

We love the Joe Danger music, but we think we’ve heard it a few too many times now. Personally we like to listen to eighties rock, while we take over the leaderboards.

The Sandbox was one of our most popular features. Now that you can share your levels across the globe, we wanted to make the Level Editor even more powerful. Every Friday we’ll be picking the 5 best user levels, and highlighting them on our front page.

On PlayStation 3 we’ve created an area which allows us to release new Downloadable content straight into your game. This is where you’ll find “Joe Danger Gaiden”! We already have another pack planned in the next month…

We’ve tried to make everything just a little bit better, from big things like how the leaderboards work, to little things like making one annoying sound a little quieter. If someone has noticed it, we’ve tried to fix it.

We couldn’t resist putting in some surprises for people who have already played Joe Danger to death. Especially if you 100% completed the game, or think you have gotten all the Pro Medals, you might want to have a another look.