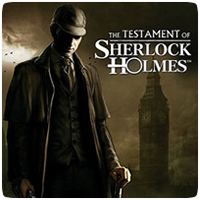 Sherlock Holmes arrives on the PS3 today in North America in The Testament of Sherlock Holmes. Solving mysteries is what the game is all about. As the player gathers clues and information, they unlock new avenues to explore in the game.

What starts as a murder investigation for Holmes, becomes an investigation into Holmes himself, and a suggestion that, perhaps… Sherlock isn’t the hero we think we know.

The game builds on the new movies and the BBC series to explore the dark side of the character. Players will travel across Victorian London, from the pristine landmarks to the dark and gritty underbelly of the city, and be immersed in the mystery they are trying to solve. The game features one of the most detailed version of London ever shown in a video game.

The Testament of Sherlock Holmes, Trailer