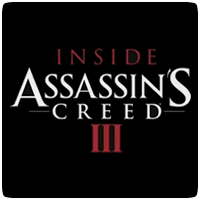 There are three more episodes to come, so be sure to keep a look out right here.

Assassin's Creed III, Behind The Scenes