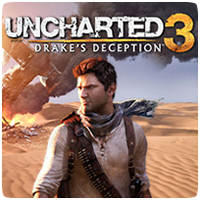 Uncharted 3: Drake’s Deception is getting a Game of the Year Edition next month, combining the original game with several DLC packs that have been released for the game. Drake’s third adventure revolves around a search for the  fabled “Atlantis of the Sands”, and will be available to purchase on September 19th 2012.

The Game of the Year edition of the game will include a number of DLC packs, including multiplayer skins, new maps, and new co-op missions to enjoy. This is a perfect bundle for gamers who haven’t experienced Drake’s third adventure yet. 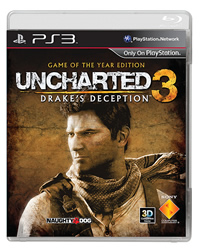 The Game of the Year edition packs in the following DLC expansions:

Co-Op Shade Survival
Take on wave after wave of some of the toughest enemies from the series – the fiery Djinn. This co-op game mode provides a sturdy multiplayer challenge with handsome rewards.

Doughnut Skin Pack
If you’ve ever wondered what Sully would look like if he really let himself go, this is the skin pack for you. Five characters from the franchise are depicted in larger-than-life form…

Game of the Year, Uncharted 3