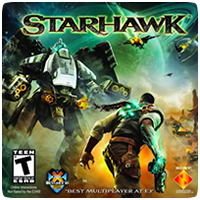 Starhawk is getting updated to version v1.03 today at 2pm Central Time (8:00pm BST), and includes increased level cap, bug fixes, and two free Cypress maps. The patch includes a massive list of changes to the game (included below), and Lightbox Interactive promise even more changes in the next patch (v1.04).

The two new maps are from the planet Cypress. Cypress is the first planet where Rift Energy was discovered in the New Frontier and its where mankind built the first Rift research facility — including the very first Extractor. The planet is abandoned and overgrown by lush vegetation now. The two maps are Cypress: Collider and Cypress: Origin, and include plants, huge trees, shallow waters and structures players can run through and even hide in. 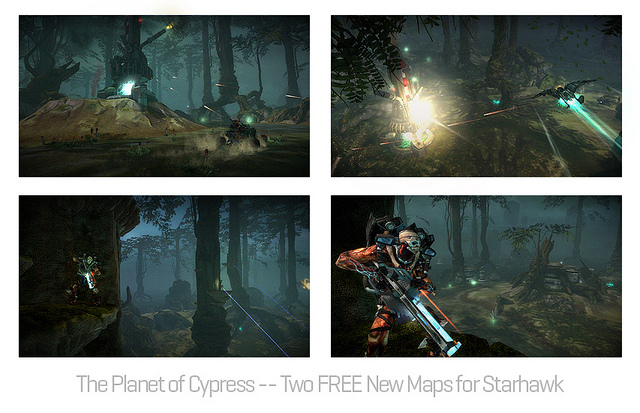 As for the other changes in the patch, the changelog is as follows:

Prestige Levels: In the initial version of Starhawk, we supported levels 1-50. To be quite honest, we thought that would have the player community covered for quite some time. However, we had underestimated the rate at which people were going to get through the levels so we had to accelerate the release of our prestige levels for those players who are above 50. The Prestige levels in Starhawk are not numbers; they’re a Greek symbol ranking of ALPHA through OMEGA. The Greek symbol will be displayed by your name in-game. These are very hard ranks to achieve and the jump from level 50 to ALPHA is steep because these are really intended for the hard-core community.

New Space Homeworld “Waypoint”: In Starhawk, Homeworld’s are like lobbies. They are 3D levels where you and your friends can go to party-up, talk tactics and then pick a game to join. This new Homeworld is a cool space station. We added this because we really wanted players to enter a deep-space “lobby” to mess around in.

Team-Balance Fixes: There were some bugs in the party/clan cohesion system where servers would keep parties and clans together in *ALL* cases and this resulted in some brutally mis-matched games. This has been fixed! There were some other issues that resulted in messed-up team balance and we have resolved those as well. Should be a ton better!

Revamped Voice Chat System: During the initial launch of Starhawk we received reports from the player community about voice-chat dropping after a few games or in some cases, the voice-chat would simply not work. As you can imagine in a deep, team-based game like Starhawk, voice-chat is critical. So we did a ton of digging to find-out what the issue was and it ended up requiring a change to our Client/Server voice system. This change makes the VOIP far more stable and resolves the voice connection issues that some players had been experiencing in the past.

Push-to-Talk Option: This was requested by so many players, and in concert with the revamped Voice Chat System, the PTT option really is a great addition. Now players have the option to have their microphone turn on when they press L3 rather than automatically when they talk. I guess, too many players were being yelled at by their Moms, had crying babies in the background, or hell, maybe both! You can find the PTT option in the Audio Settings menu in the Uplink.

Rift Barrels on Mini-Map: To help aid players and their use of the Build & Battle system, we decided to add small icons on the mini-map where we’ve placed the Rift Energy Caches — those are the barrels that you shoot that burst open with Rift Energy that you can spend to build your arsenal of destruction. The blips on the map are displayed when the barrels are active and are *NOT* displayed when the barrels are waiting to respawn.

Bug Fixes: These are not as super-sexy as free maps, but the fact that they are fixed will really help the community. We also addressed some host migration issues, a number of crashes and network instability issues, and even the laggy pick-up bug was fixed as well.

Ranked Option: Another feature that was requested by players was really two requests related to how games post stats. The first point brought up by players was regarding stat-padding going on in password protected games, and since those games were password protected, they should not count as real ranked games. Now, you can still have a very private game with a password but your stats will not post. Also, if you are having a Clan vs. Clan game you have the option to turn stats on or off — because it might be a practice or scrimmage. Furthermore, if you are doing a Clan Scrimmage (your clan in both Rifter & Outcast slots) the stats will *NOT* post to the server. This is to keep clans from stat-padding in locked-out games.

Skills Shortcut at the Respawn Screen: Players really wanted a quick way to change skills without having to leave the respawn screen. So…we added a little tab in the upper right corner of the respawn screen that allows you to press TRIANGLE and jump right to the skills menu! Oh, and we also now allow you to change your skill at other places in the Uplink instead of only in-game.

Build & Battle Icons While Respawning: Another thing we did to help players when using the Build & Battle system was to display a simple graphic icon of each of the structures on the battlefield as the player is drop-poding into combat. This simple change really helps players know what structures are already built and helps them make better use of the stuff their team has built. Not to mention it helps let you know immediately where you should run when you crack-open your drop-pod!

Display Nearby Build & Battle Structures: There are now some new visuals to help players recognize Build & Battle structures that are built nearby. For starters, any time you place a structure; Starhawk very clearly displays how many are nearby. It also now highlights those nearby structures on your map *AND* displays some markers on the edge of the screen to help inform you that not only is there a structure nearby, but which direction it is.

Cooldowns for Host Kick and Team Switch: There were a number of exploits that could occur in the original version of Starhawk where players would change teams rapidly or a host would quickly kick a ton of players. That can no longer occur because we track when you perform one of these actions and block you from doing it again for a set amount of time — and we can tune the time if we need to.

Interactive Music Update: After playing Starhawk for so many hours, we really felt that the music was not kicking-in as frequently as we wanted it to. There were many times when you’d be in the heat of combat and there’d be no music at all. We felt this hurt the pacing and in fact some players in our community noticed the same thing. So the 1.03 Update includes some new tweaks to the interactive music system and the more frequent music makes a big difference.

Capture the Flag Scoring Change: We’ve been playing CTF in Starhawk a ton here in the studio and we’ve always felt that there were too many games ending in draws or times when the match would get into awkward stalemates. So with the 1.03 Update, we have changed one of the key rules for CTF and one of the key contributors to the stalemates. Now, to score a point in CTF, you need to take the enemy flag back to your base — period. Your team’s flag does *NOT* need to be there for you to score. Now certainly, your team still needs to play defense because you don’t want the enemy team taking your flag and scoring, but this change makes the pacing so much better. Much faster and far fewer draws and stalemates.

Sorting Unlocked Customization: Now this is more of a simple convenience thing but we changed the way the various characters and vehicle customization options are presented so that the unlocked ones are always displayed at the top of the list. Not a super-big change at all but I thought I’d include it here.

Drop-Pod Upgrade: One of the things that we were experimenting with during our Starhawk playtests to help combat “base-ravaging” was to make the Drop-Pod more deadly. Our whole design goal with the drop-pod system was to make the act of respawning in your home base an incredibly powerful weapon. This was to help combat against “base-ravaging”. After a lot of review, and play testing and tweaking, we decided to upgrade the drop-pods to be more maneuverable *AND* have an increased impact radius. This along with some changes we made to the respawn timer really makes a huge positive impact on the reduction of “base-ravaging”.

Custom Music via XMB: In Warhawk we added support for your own music and we’re doing the same in Starhawk. The 1.03 Update now allows you to play your own music through the XMB. So if you want to experience Starhawk’s unique Build & Battle gameplay while blaring Pat Benatar you totally can!