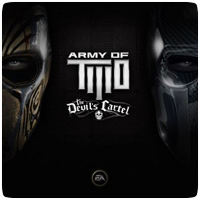 EA have announced the third installment of their co-op focused third-person shooter series, Army of Two. Set in the streets of Mexico players will take control of two operatives working for Tactical Worldwide Operations (T.W.O.), dropped into a drug war for an assignment full of corruption and deceit.

The third instalment is subtitled, The Devil’s Cartel, and will feature online and split-screen co-op. It will also included a more advanced customisation system than what was seen in the previous two games. The game is scheduled for release in March 2013.

We wanted to refresh the Army of TWO franchise for a new generation of action gamers, and at the same time, stay true to the core concept that really made the first two games fan favorites. With meaningful, seamless co-op gameplay at its core and explosive new tag-team features, gamers will have to work together tactically and strategically as they push through a city dominated by one of Mexico’s deadliest drug cartels.

Our goal with Army of TWO The Devil’s Cartel is to apply our key design principles – immersive, challenging gameplay, intense narrative and focus on quality – to help improve a franchise we feel has always had a lot of potential.

One comment on “EA Announce Army of TWO: The Devil’s Cartel”