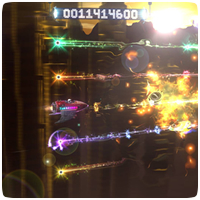 Development on award-winning rhythm/shoot’em up Retro/Grade has completed and the game will be releasing on the PlayStation Network next month. In addition, Sony has also confirmed that the game’s soundtrack will be available for purchase too – either standalone or as a bundle including the game.

“At the beginning of the game you stop a massive alien invasion,” explains Matt Gilgenbach, Co-founder, 24 Caret Games, “but all the destruction damages the space/time continuum, causing the flow of time itself to reverse.”

“What would have been the final boss is actually the beginning of your backwards journey. You must help Rick Rocket restore the continuity of space/time, before the temporal anomaly rips the universe a new time-hole!”

The game is playable using a DualShock 3 controller or a PS3 Guitar (from Rock Band or Guitar Hero).