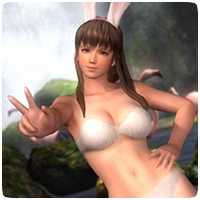 Tecmo Koei have revealed the box art for Dead or Alive 5, which releases on the PS3 towards the end of September. In addition, screenshots of the “White Bunny” pre-order costume were revealed too (see below).

The bunny costume will be worn by Hitomi, Ksumi and Leifang in the game. It will included as a pre-order bonus from selected retailers, including Amazon and Gamestop.