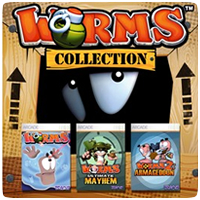 Mastertronic have announced the ‘Worms Collection’ for PS3, featuring Worms, Worms Ultimate Mayhem and Worms 2: Armageddon, plus an additional six DLC packs. The collection will be released in the UK on 31st August.

The price for the collection wasn’t revealed, but will be at a ‘price you can’t afford to miss’, according to the press release. In addition, the latest game in the series, Worms Revolution, has also been announced. The game will be heading to the PlayStation Store on 10th October priced at £9.99/€12.99.