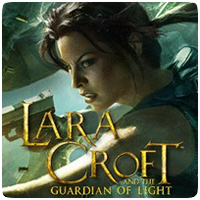 SCEE has revealed that Europe will be getting two new titles in the Instant Game Collection in tomorrow’s PlayStation Store update. Chime Super Deluxe and Warhammer 40,000: Space Marine will be removed from the collection and replaced with Lara Croft & the Guardian of Light and Saints Row 2.

Lara Croft & the Guardian of Light

With Lara Croft and the Guardian of Light, enjoy a classic formula of combat, exploration, puzzles, and breathtaking visuals in this fast-paced arcade experience. Team up with a friend or go at it alone as you traverse deadly traps, fight hordes of undead enemies, and collect dozens of weapons, artefacts and relics.

Square Enix have also thrown in all five downloadable content packs at 50% off, including three sets of challenges and story missions, as well as two sets of character skins that let you play as either Raziel and Kain (from the Legacy of Kain series) or Kane and Lynch. All these packs will be 50% off exclusively for Plus-members for two weeks from Wednesday.

Saints Row 2 brings true freedom to open-world gaming. Limitless customisation, multiplayer co-op, competitive multiplayer and killer combat are just a few of the features that make Saints Row 2 the most over the top sandbox in gaming.

Vehicles can be fully customised along with your crib. The full co-op story campaign has seamless integration (for example, one player drives while the other shoots). An array of awesome vehicles like planes, helicopters, motorcycles, boats and cars can be piloted and used as weapons. Over 40 missions, new activities, diversions, races, weapons, vehicles, cribs, city districts, and interiors make Stilwater over 50% larger than before.

Saints Row 2 also comes with three fantastic add-on packs to fill out your experience, and of course, they’re 50% off for the first two weeks, again exclusively for Plus-members.

PlayStation Plus subscribers can also enjoy:

On August 1st, wave goodbye to Deus Ex: Human Revolution as the title will be replaced with a new titles.
Instant Game Collection, PlayStation Plus