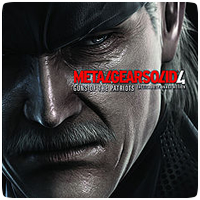 In addition to the recently announced trophy patch for Metal Gear Solid 4, Konami has also confirmed that there will be a new retail version of the game, known as “The Best” edition, available at a lower price and allowing gamers to install all the game data needed for the game from the start.

The current version of the game requires new data to be installed after each chapter is completed, meaning gamers have to wait for several minutes before they can continue playing the game. The “full install” option will only be available on the new retail version of the game, which is likely to be a Japan-only re-release.