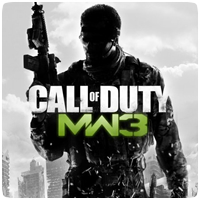 The second collection for Call of Duty: Modern Warfare 3 is now available to purchase from the PlayStation Store. The DLC includes three new multiplayer maps (also usable in Survival mode), two Special Ops missions, and two Face Off maps. The collection can be downloaded for $14.99 on the Store.

Face Off is a new multiplayer experience that challenges even the most talented Call of Duty players. It distills all the fun and intensity of multiplayer into a new breed of 1v1, 2v2, and 3v3 close combat. Partner up with a few friends and challenge your team skills, or go head-to-head against your most challenging opponent. With the inclusion of two additional maps for free on PSN, Call of Duty veterans can get even more of this new experience.

Getaway
Close to the shore, this place once was a tropical beach getaway boasting exotic aquariums and oversized pools, but is now a haven for ruthless run-and-gun violence. The best method of attack is to throw down a portable radar in the middle of the house, and maneuver around your opponents. Alternatively, you can kick back behind the pool and pick off heads when they pop out of doorways and windows.

Lookout
Carved into a combat-worn mountainside, this new “Face Off” map pits you against your opposition in a forward observation base littered with chokepoints and tight corridors. There are several methods of attack for you and your partner(s). Stick to high ground, whether that’s on a hill or above a base, or run guns blazing through the bases to grab that quick kill.

Erosion: Free
Make your way through Mediterranean ruins and ancient aqueducts, using leftover Roman masonry for thousand-year-old cover. As my personal favorite Face Off map, I get a kick out of leveraging the SMGs’s rapid firing rate and maneuvering as fast as I can under the archways. Taking the low ground is one way to go, or you can be the first to take the center tower and snipe opponents from above.

Head to Scotland’s Orkney Islands where treacherous cliff faces, cave networks, and the rusted and ruined remains of a grounded transport ship provide for constant combat. This is definitely a map where you’ll want to pick off enemies using long range weapons — I also suggest using the Marksman perk.

Sanctuary
Suspended a thousand feet in the air, you’ll find yourself battling on towering sandstone monasteries in Central Greece. There are plenty of windy paths and hidden locations in which to station yourself, or you can move quickly to flank the opposition.

Foundation
This decommissioned concrete factory is located in the heart of South Korea. After decades of constructing roads and buildings, the towering facility is now a perfectly-constructed combat zone for sniping, as well as fast-paced shootouts.

Oasis
Though once a picturesque escape for vacationers, the sprawling Hotel Oasis is now a multiplayer paradise, with multiple lanes of combat built atop an ancient fortress.

Iron Clad
With one player manning a tank and the other escorting it on foot, you’ll clear beaches and take cover in plane wreckage as you escape Hamburg from behind enemy lines in this all-new Special Ops Mission.

Kill Switch
Cripple a Russian carrier by detonating an electromagnetic pulse. Be the soldier on the ground, making your way to the detonation site, or play the sniper providing vital cover fire from a vantage point high above the city.