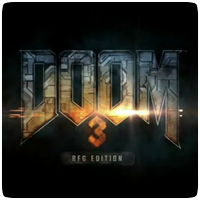 Bethesda have announced that Doom 3 BFG Edition will be released on the PS3 from October 16th in the US and October 19th in Europe. The game is a remastered version of Doom 3 but will include the Resurrection of Evil add-on pack and seven new levels called “The Lost Mission”, as well as trophies.

The game will cost $40 in the US, but European pricing has yet to be confirmed. The game expects to retails for £29.99 in the UK.  “Re-mastered for both Xbox 360 and PlayStation 3, DOOM 3 and it’s [sic] expansion pack offer enhanced visuals further immersing you in the demonic world like never before,” says the Bethesda press release.

The game is now in 3D, features 5.1 surround sound, PlayStation 3 trophies, improved rendering and lighting, and a new check point save system “allowing for smoother progression through the game”. The game will also include ports of the original Doom and Doom 2 games.