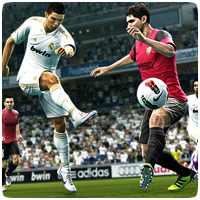 Pro Evolution Soccer returns to the PS3 later this year with many improvements and additions over the previous game. In addition to all-new AI, PES 13 has implemented many new features in direct response to fan feedback, including better control and full manual shooting.

Other improvements include more natural dribbling and defensive moves, especially when lines are arranged depending on your play. There are also goalkeepers with all-new animations who are more effective and have the ability to manually pass the ball for more precise counterattacks.

The Player ID is the digital representation of some of the top players in the world of football. This means that players like Cristiano Ronaldo, Messi, Ribéry, and Neymar can run, shoot, and dribble the ball just like they do in real life, reflecting the individuality and authenticity of the stars they are. PES 13 will have approximately 40-60 players using a Player ID, including forwards, the defensive line, and goalkeepers.

The Player ID is a major feature for PES. After all, people go to football games to see the stars of the team, and it really makes a difference when you have a star on your team in PES 13.

PES13 is still a game that requires decisions, from what to do with the ball when it reaches your feet to making a pass, running and facing your opponent, shooting at the goal, or simply freezing. If you do nothing, you lose possession of the ball. Fortunately, you can learn to make the best decision after a short time of playing, and become an expert in the sport, even if you never were before.

Check out the interview below between the PlayStation.Blog and Senior Producer Naoya Hatsum and Marketing Producer Manorito Hosoda to learn more about PES13.

PlayStation.Blog: You mentioned that you are not working on a PS Vita version this year, but are you at least planning some kind of PS Vita connectivity? For example, you could play on your PS3 and use your PS Vita for making changes or something in gameplay without pausing the game?

PES Team: We are thinking about adding connectivity on tablets and mobile communication tools, but not PS Vita at this time.

PSB: You said there is going to be among 40 to 60 players replicated in PES 2013 using Player ID. Are you planning to include more players via DLC in the future?

PES Team: At this moment we don’t have any plans for additional players through DLC. However, if there’s a very huge demand from users or community asking for it, we may have to think of it. And if we do something like that, we don’t know if people would pay for it. Would you?

PSB: Well, that’s a very good question. [laughs] But yes, I think I’d pay for it. Talking about community, you mention that user feedback is very important this year. So how are you collecting and implementing that feedback into PES 2013?

PES Team: Yes, community feedback is very important to us. Of course, listening to the opinions from fans is one thing, and that is going to satisfy users. But we also are creators, and there are features we want to offer that cannot be obtained through feedback from the users, because they are looking to the current product, and we are looking into the future. So, in a sense, we would like to surprise the players. That’s something we also want to do. There should be a good balance between what we want to do and user feedback.

And we highly value user feedback because, depending on what they want, the actual gameplay may vary greatly. For example, Brazilian players can see football as something different from people in other parts of the world. So we would like to know these nuances, if there are any, by collecting all this feedback from users, because our game is intended for a worldwide audience, and we have to think about all these elements.

PSB: Playing football is about decisions, I think. For example, if you’re playing in real life, when you receive the ball, you have maybe a split of a second to think what to do – you may pass, you may shoot to the goal, maybe you can faint… How do you translate that into a videogame? I mean, PES is like super hardcore, it’s a game with a very difficult learning curve, but when you understand it, it’s so fluid, it’s so fast. How do you transfer the complex elements of football to the controls?

PES Team: As you mentioned, it is quite hard to translate that split-second movement from the real game, because a football videogame requires a controller. What we aim is to do is make players feel as if they are in the real field when playing with a controller. That’s always our ultimate goal. And we try to reach that goal by continuously adjusting the AI and tweaking other elements of the game and the gameplay itself. It’s something very hard to express with simple words.

PSB: Any chance we’ll be seeing 11 players online this year?

PES Team: We can probably talk about that next year. [laughs]

PSB: You said in the presentation that Shingo “Seabass”Takatsuka-San is busy with another project, but at the same time he is still part of the team. So, how is he involved with PES 2013?

PES Team: We cannot detail what Seabass is doing at the moment. The only thing we can say is that he is working in a new project. As for PES 2013, he actually supervises the production of the game and is deeply involved with the main improvements we’re making this year.

PES Team: Well, there are no major improvements or changes for the Edit features this year.

PSB: Up until now, all your DLC for PES has been free, for example new sneakers, new balls, player customization items… With the market constantly changing, have you ever thought about offering paid DLC in the form of a huge DLC pack with new modes or seasons or tons of new features?

PES Team: As for this year, there will be no paid DLC, there is no plan for it. However looking at the situation, of course, we got the feedback from you that you would be pretty much happy to pay for additional Player ID, for example. So we may think of introducing something as paid DLC in the future.

PSB: PES is evolving every year, but talking about the future, where do you see PES maybe in three or five years? Do you want to be more social, do you want to see better graphics, improve AI or something entirely different?

PES Team: We believe people’s life style has been changing drastically, because of things like the new mobile gadgets and tablets, and cloud storage is also one factor… The game user itself has been changing because of the development of the mobile devices, so what we are trying to do is cater to all possible potential users. That’s what we want to do in the future. So not just reach console gamers, but also any potential user, including those using these new kind of devices.