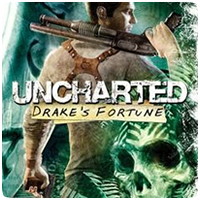 In Uncharted: Drake’s Fortune, a 400-year-old clue in the coffin of explorer Sir Francis Drake leads Nathan Drake on a wild adventure to a forgotten island in the middle of the Pacific Ocean. Here Drake hunts for the fabled treasure of El Dorado. Learn the backstory of the colorful cast of Unchartedcharacters and the ancient secrets El Dorado hides.

Uncharted 2: Among Thieves Game of the Year Edition is the winner of over 200 Game of the Year awards, and one of the most highly acclaimed video games of all time. In this sequel, Drake is drawn back into the treacherous world of thieves and treasure-seekers. A mystery artifact propels him to undertake an expedition to the legendary Himalayan valley of Shambhala where he finds himself embroiled in a dangerous game of cat-and-mouse against a fugitive war criminal. Pushed to his limits, Drake is forced to risk everything.

Earlier this month, the Uncharted 2 DLC content all became free on the US PlayStation Store. Later today, everyone worldwide will be able to download the following DLC content for Uncharted 2 absolutely free of charge:

This free Uncharted 2 DLC program will run until the digital launch of the two titles on June 26th. Once the PSN store updates on June 26th, all this DLC will only be available via purchase on the PS Store or when you buy the digital version of Uncharted 2: Among Thieves Game of the Year Edition.