Starting today, anyone who pre-orders Starhawk at GameStop will automatically upgrade to the Limited Edition version of the game. This version comes with over $20 worth of bonus content, including two DLC packs that contain new maps and multiplayer skins, plus sweet extras like the soundtrack and a PSN download of original Warhawk from PSone.

In addition, the official boxart for the game has also been revealed: 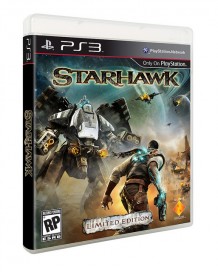