DICE have revealed some information from the recent Battlefield 3 Open Beta, as well as improvements made to the game as a result of the beta. But it’s not all network load balancing and matchmaking algorithms; check out the info graphic below for some quick facts on the Open Beta. 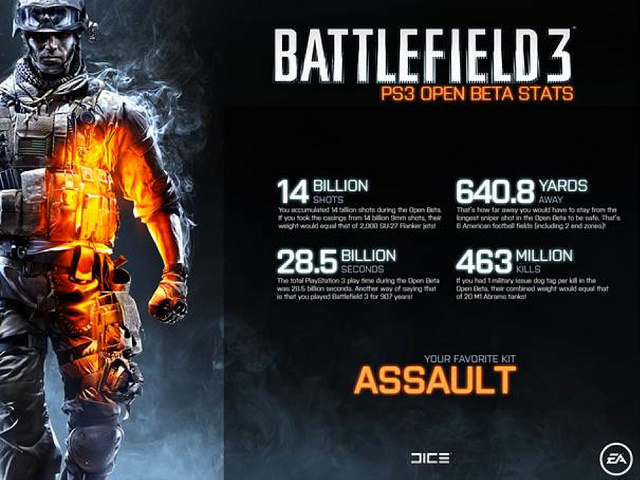 Just a few more days now before the game launches on the 28th, and as you may know already, PlayStation 3 players will get access to the expansion pack Back to Karkand one week early. Finally, here is a short selection of just some of the hundreds of changes and additions made to the game before launch, as a direct result of your feedback in the Open Beta:

Improved Squad Functionality
There will be improved squad functionality in the retail game (including but not limited to): the ability to create squads prior to launching into a game, sticking with your squad when joining a game and continuing together through future games (if team balance on the server allows it), inviting friends to a squad, and changing squads once in game.

More Accessible Settings Menu
The ability to modify your settings via the deploy screen has been added into the retail game.

Improved Kill Cam
In the Open Beta, the Kill Cam would sometimes behave erratically. This has been fixed for the launch of the retail game.

Netcode Optimization
The netcode is one of the many things that we tested as part of the Open Beta and it was not necessarily reflective of the final retail game. The DICE team appreciates, and has heard, the feedback you’ve provided and is further optimizing online play.