So, hot on the heels of our packshot unveil last week, the release date for the UK and Special Editions of the game have been revealed this week. We’ve got information on the Resistance 3 pre-order bonuses available across PAL, as well as a first look at the Special Edition and Survivor Edition game bundles.

Sony has confirmed that Resistance 3 will be launching across PAL on the following dates:

Once a common sight in the war against the Chimera, this special SRPA Black Ops multiplayer skin lets you return to the battlefield as one of the most mysterious and deadly soldiers from Resistance 2 and Resistance: Fall of Man.

By skipping his viral inhibitor treatment throughout Resistance 2, Nathan Hale fell victim to the deadly Chimera virus. Now you can resurrect the fallen hero with this special multiplayer character skin.

Equip Joseph Capelli with an explosive advantage as he embarks on his journey across America. This exclusive grenade releases a cloud of highly flammable vapour, creating a huge blast when ignited – perfect for taking out hordes of Chimera in tight urban spaces.

Pledge your allegiance to the elite unit of the SRPA – the Sentinels – with this multiplayer title, exclusive to pre-order customers.

Get an early advantage on the multiplayer battlefield by starting the fight at level 5 – and gain access to a range of character and weapon customisation options.

Show your support for the resistance by wearing Joseph Capelli’s Chimera tooth necklace.

Next up we have the Resistance 3 Special Edition. This version of the game comes in a stunning steelbook case – packed with a voucher code for all of the pre-order items listed above.

Not only will this look awesome on your shelf, (the array of logos are on a perspex o-ring which you can remove) but this version will also come complete with a very cool ‘vinyl effect’ blu-ray disc (complete with the ribbed vinyl effect on the surface). 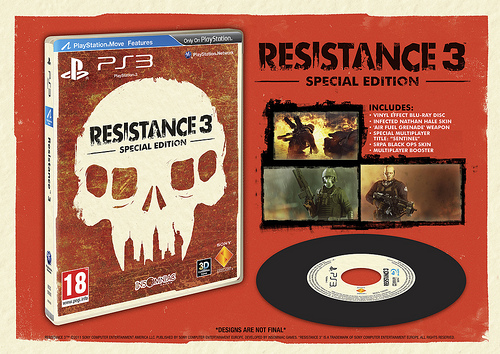 Now last, but by no means least, we have the Resistance 3 Survivor Edition! This uber-bundle comes complete with the following content (as well as the Special Edition pack listed above): 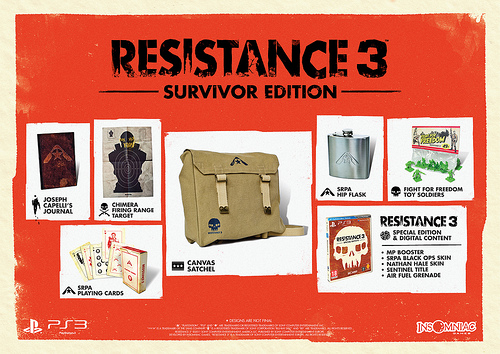