Following the release of the Resistance 3 packshot earlier this week, SCEE and Insomniac Games are now proud to follow up with the official announce of the Ratchet & Clank: All 4 One packshot. Insomniac has also revealed that All 4 One will be releasing across PAL regions from October 19th, 2011.

Be aware that release dates vary depending on where you live, so for more information please keep an eye out on the PlayStation.Blog. 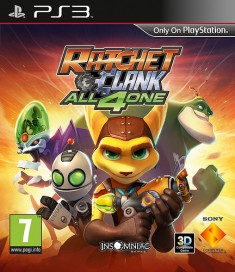 Boxart, Ratchet & Clank: All 4 One