Earlier today, SCEE officially announced the third title in the Uncharted series: Drake’s Deception. The title is once again being developed by the team at Naughty God Inc, and exclusive to the PlayStation 3. Uncharted 3: Drake’s Deception blurs the entertainment boundaries, delivering the cinematic scale, adrenalin rushes, thrills and mystery that are the UNCHARTED trademark.

Fans of the franchise and newcomers alike will relish the opportunity to catapult themselves headlong into a real adventure, in a search for the fabled “Atlantis of the Sands.” The journey propels fortune hunter Nathan Drake on a daring trek into the heart of the Arabian Desert, a journey that pits him and his mentor Victor Sullivan against the occult treachery of a shadowy clandestine organization and its ruthless leader.  When the terrible secrets of this lost city are unearthed, Drake’s quest descends into a desperate bid for survival that strains the limits of his endurance and forces him to confront his deepest fears. 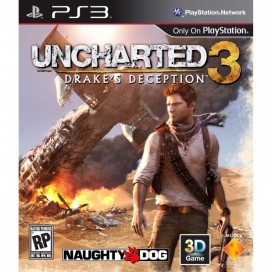