Heavy Rain Move Edition will be priced at €39.99 / £29.99 and will be released across PAL territories on the following dates: 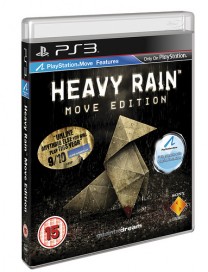 It will include the following bonus content on the disk:

Heavy Rain has been given a PlayStation Move makeover so expect to be even more drawn into the action and for your every decision and every move to make a difference. And on 22nd September the Move Edition patch will be released and it will automatically download to your PS3 when you boot up Heavy Rain.