As promised by Square Enix, a new character for Final Fantasy XIII has been named. The information, howeverm comes through Japanese gaming mag V-Jump, and not directly from Square Enix. The new character, Yaag Rosch, is somewhat reminiscent of Loz from Advent Children, with the short Sephiroth-like silver hair. If you don’t already know, he won’t be in your party – instead will be busy trying to beat you all. 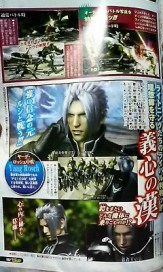 The magazine also gives more info about Odin, who was allowed to be summoned for the special E3 presentation. The scan showed how Odin transforms into a super horse which Lightning can ride, much like when Snow mounted the Shiva sisters. While Odin could just hand Sleipnir over to Lightning if she needed a ride, he’d much rather be a part of the ride than to part with his eight-legged steed.