As we have previously reported, Warhawk patch v1.5 is due for release on August 27th 2008, after the final phase of testing is complete. The update will be available to download for free and will bring a number of new features and improvements to the online-only game. Dylan Jobe, Game Director for Warhawk, has revealed the list of new features, including custom in-game music and trophy support. Check out the complete list below.

You can now listen to your own music when playing the game. Warhawk will detect the XMB player and automatically turn off the in-game music.

We revealed the list of Trophies for Warhawk in a previous article so be sure to check it out. There will be 56 trophies in total, 12 of which are available on the booster packs only (four per booster pack), and 10 will be retroactive based on your server stats. Some trophies are hidden but you can see the complete list in our previous article.

It’s difficult for new players to play Warhawk and the skill-levels between players varies largely. In order to help new players learn the controls, weapons etc, Warhawk v1.5 will include four simple tutorials that can be played off-line. Each one focuses on the core principals of each of the 3 modes of gameplay: Infantry, Ground Vehicles and Aircraft.

After completing the tutorials, a trophy will be unlocked, so there is an incentive for more experienced players to give the tutorials a try too.

This is a feature many players have requested. Now, for what ever reason, you can take back a clan invite from a user. As there is a maximum number of invites for a clan (64), clan admin’s may decide to reallocate invites as necessary. 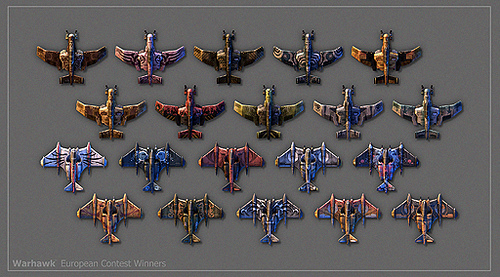 An attractive green color has been added to all official “rookie” server names in the server list. Players that are eligible to play on rookie servers will find these servers sorted to the top of the list automagically for easy selection. To recap the color coding, Blue servers are official Sony hosted servers, Yellow servers are games launched from HOME, and Green servers are reserved for "rookies".

Jobe has neither confirmed or denied rumors of a new booster pack coming out soon, which is said to include a Jet Pack. Keep your eyes on XTREME PS3 or the PlayStation.Blog for any updates on the booster pack. Jobe did mention more details to be revealed at the Leipzig Game Show.