With the release of the new PlayStation Store, we took a look at now the two stores now compare. While the interface and navigation has certainly improved, there are till major differences between the US and European PlayStation Stores. The US store is better organized and as we all know, they get better updates then the Euro PSN Store. Here is what we found out.

First off, the PlayStation Store loads a lot quicker though the icons do take a while to load up. Navigating is a lot easier too, and works much like a menu. You press

to select items and

to move up one level. The categories are only visible on the top level but there is a button on the top left of the screen that will take you straight there. The new Store looks the same on both SD and HD resolutions, unlike the old store layout. 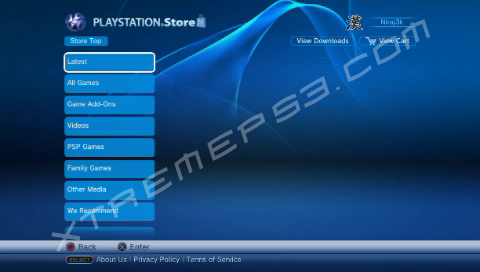 There are more categories available so it makes finding what you want a lot easier. But this is where the US and Euro stores are different. The US store is much better organized with content much easier to find. For example, Demos can be found in the "Demos" category, but for Europe, you will have to first look in "Latest" and then "All Games" if you can’t find it. There is no "Demos" category in the European Store. And what’s with the "Family Games" category? The "Other Media" category contains Themes and Wallpapers to why not name it that (like the US store)? 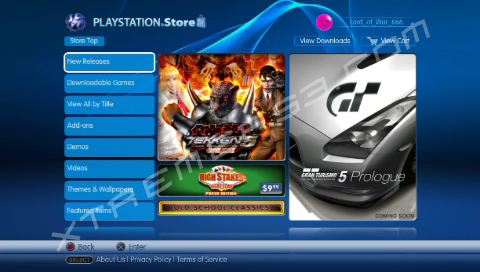 After the icons have loaded, the store is much quicker to navigate. You can easily see information about an item without clicking on the item itself. A smaller icon within the item icon indicates whether the item is in your basket (basket icon) or if you have already downloaded (shown by a red PlayStation Bag icon). Some games have a "Preview" button which launches a video player so you can watch a video related to the item. SCEE states that the slow loading of icons is a temporary issue and should be resolved within a few days (see below).

The store is much better that the previous version and Sony have done a good job in improving the interface and navigation. The interface is still blue but looks cool. We were a bit disappointed with the poor categorization of the European store but hopefully Sony listens to the feedback and improves this. We’re now looking forward to the new store additions coming this Thursday (Metal Gear Online Beta, Warhawk: Operation Broken Mirror and Gran Turismo 5: Prologue).

"We are aware that many of you have experienced delays whilst the PS Store’s thumbnail icons are being downloaded. This is a temporary consequence of a new system implementation and high global traffic levels, and will be resolved within the next few days."